How to Avoid a Climate Disaster

TED-Ed has released a 7-part series of interesting short videos inspired by a new book by B. Gates: How to Avoid A Climate Disaster. The videos introduce the biggest obstacles in the fight with the climate crisis and explain how to overcome them.

One of the obstacles, which a part  entitled “Why good ideas get trapped in the valley of death— and how to rescue them” was devoted to, is the efficient storage of electricity and the integration of renewables into existing infrastructure. The main problem is the high cost of developing new technologies, which can be compensated by national governments with their own subsidies. In the USA, they decided to invest 75 mil. dollars in the Grid Storage Launchpad (GSL), a new institution bringing together scientists from across the country. These scientists will work on accelerating adaptation to clean energy sources and also accelerating the development and deployment of long-term and low-cost energy storage. Huge energy “farms” have also been set up in China this year, which, thanks to its huge battery storage, wants to become a carbon-neutral country by 2060. One of the largest floating solar farms has also been established in Singapore.

In addition to designing huge energy farms, planning the use of renewables and batteries in small microgrids is a very important task, where the solution is complicated by a large degree of uncertainty. It is difficult to predict the electricity consumption of individual households and that is why creating an optimal daily plan for charging and discharging a battery in a microgrid is a big challenge. The Energo team at KINIT deals with the solutions of  the tasks related to optimal use of energy from solar panels for small microgrids. As we stated in our previous post, the Energo team addresses this issue from the perspective of individual consumers, to whom the optimization of the consumption of locally produced energy will bring not only environmental but also financial benefits.

The Impact of Artificial Intelligence on Carbon Footprint

The impact of human activities on the environment is discussed more and more. Many of you have definitely heard about the impact of cattle breeding, transport and the fashion industry... 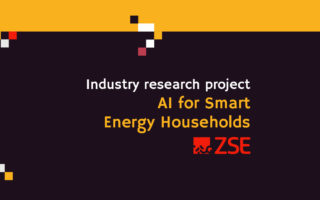 ZSE and KInIT: Extension of a successful collaboration

We successfully completed  the first year of smooth cooperation on the AI for Smart Energy Households project with ZSE.   Now we are one step further in utilization of artificial intelligence...